Create an Account - Increase your productivity, customize your experience, and engage in information you care about.

The historic town of Lexington, South Carolina is a direct descendant of the old Royal township of Saxe Gotha. This township was 1 of 11 established in 1735 by the Colonial government of King George II to encourage settlement of back-country South Carolina and serve as a protective buffer between powerful Indian tribes to the west and the older settled plantations of the low country. The name Saxe Gotha was in honor of the marriage of the British Prince of Wales to Princess Augusta of the German State of Saxe Gotha.

The Town of Lexington Seal features a double oval like the seal of the State of South Carolina. The first oval depicts the different flags under which the Town has flown and the name Saxe Gotha, which was the name of the original township in 1736. The rising sun signifies from the past to the future. The right oval shows the location of Lexington within the state and proclaims friendship and unity. The date 1861 appears at the bottom of the seal, which is the year the municipal charter was first issued to the Town. 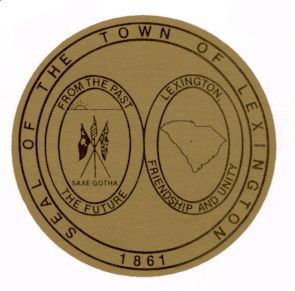 The territory of colonial Saxe Gotha covered most of present day Lexington County, and was traversed by 2 important early Indian trails:
These ancient trading paths and the highways that later developed from them have had an enormous impact on the historical development of the area. Most of the early settlers came from various cantons, principalities and city-states of Germany and Switzerland. Others came down from Pennsylvania, and Virginia. Despite the disruptive Cherokee Indian War of 1760 and the "Regulator" unrest that followed, the township flourished as a largely self-sufficient area of small scale farming operations. Major crops in the 18th Century included corn, wheat, tobacco, hemp, flax, beeswax and livestock.

During the American Revolution several skirmishes occurred in the area. The Battle of Tarrar Springs was fought just 1 mile east of Lexington on November 16, 1781.

In 1785 Lexington County was established, changing the name from Saxe Gotha to Lexington in honor of the Massachusetts Revolutionary War battle. The county's first courthouse was built at Granby, located just south of present day Cayce.

With the clearing of upriver lands for the spreading cotton culture, Granby became plagued with floods. The county seat was moved in 1820 when the present town of Lexington was laid out on a high, healthy sand ridge near Twelve Mile Creek. The town was known as Lexington Courthouse throughout the 19th Century since in the first few years of its existence there was only the courthouse with few residences.

By 1861, when it was incorporated as a town, Lexington boasted a diverse population of lawyers, physicians, tradespeople, artisans and farmers. There were then 2 churches, several schools, a carriage factory, a saw and gristmill, a tannery, livestock yard, tin and blacksmiths, and a weekly newspaper. The major crops of the surrounding countryside were mainly cotton, corn sweet potatoes and lumber. Lexington was not a marketing center for these staples, but did serve as a retail market for manufactured goods purchased wholesale by merchants in nearby Columbia.

In 1865 the town was virtually destroyed by occupying Union Army forces guarding General Sherman's western flank. The courthouse, county jail and St. Stephen's Lutheran Church were put to the torch as were most businesses and homes. The devastation and political turmoil of the period were weathered, however, by a frugal people willing to rebuild for a future without abandoning the ideals of their heritage.

The small farms with their varied crops and the lumber industry stabilized somewhat the economy of the area after Reconstruction years. The completion of the Columbia to Augusta Railroad just after the Civil War and the construction of the Lexington Textile Mill in 1890 contributed greatly to the growth of the town itself. Disastrous fires in 1894 and 1916 on Main Street resulted in the construction of brick buildings, many of which are standing today.

The Town of Lexington has continued to be the political center of Lexington County, one of the fastest growing areas of the nation. With new major highways passing nearby, the town continues to experience phenomenal growth. The people of Lexington are proud of their past and look forward to a promising future.
Agendas & Minutes